FRIDAY 'ROUND THE HORN.

Here’s something I don’t do enough:
Pimp new shit from people I know!
(Mike was the drummer for the legendary Sharky’s Machine.)

•   Speaking of new shit from people I know, I wonder how many of you are acquainted with The Underground Bunker, wherein former Village Voice EIC/my boss Tony Ortega harpoons his white whale, the Church of Scientology, practically every day. (Tony’s a real newsman so there’s lots of reporting and inside dope, not the kind of folderol I do.) And how about that very tight & cool band The Carvels whom New Yorkers can see live tonight! More log-rolling to come!

•   OK I know what you mugs want: More Roy Edroso Breaks It Down freebies. We have two this week: First, a history lesson inspired by Tubby’s lecture on Robert E. Lee. Next, today’s 9/11 anti-column, sorta, in that it’s about the backwash of bullshit that came in the wake of the Towers’ fall. We can be forgiven for being frightened and uncertain at a time of great stress, but the people who exploited those feelings to launch an expensive and destructive graft machine, and who kept running alongside it for years to make sure no reason or sanity could impede it, really ought to be in prison. Free-riders, why not subscribe? TODAY ONLY we offer 10% off the annual rate.

•   Speaking of grifters, I have to say I’m enjoying the shrieks of wingnuts who think Biden’s federal worker vaccine mandate -- which, I am sure you sane people will agree, is the least he should be doing -- is an infringement on their civil rights. Kudos to this cowboy for the most sputterrific logo: 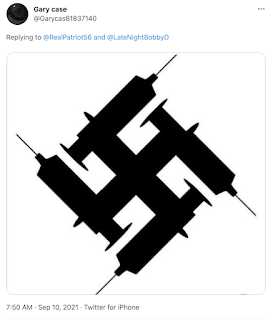 In a nation where people got sterilized, lobotomized, and experimented on against their wills, it’s pretty rich that some people think inoculation against a deadly disease is Hitler. Top Republicans are trying to get on the bandwagon: In addition to screaming FREEDOM and threatening civil war (the new last refuge of a scoundrel) they’re trying the old “oh yeah what about black people you liberals love so much” thing:

Black folks are actually vaxxing up strong now, but that’s well beside the point -- which is that it’s about time we treated this goddamn emergency like an emergency. Fuck these assholes.